I recently had a flying visit to Madrid: two days’ conference, one day’s sightseeing, far more Spanish food than was reasonable given the length of my stay (top food tip: the Mercado de San Miguel, an entire market of stalls selling every possible kind of tapas…). However, as is traditional for RG travel repo 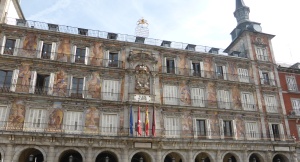 rters, I selflessly devoted much of my free time to tracking down Classics-related features of the city for the benefit of our readers. First up: an iconographic tour of the city centre, starting with the Plaza Mayor, home to the Casa de la Panadería (‘House of the Bakery’, though it’s now a town hall). This was built in the 17th century, but in the 1990s the front was redecorated with a new series of frescos depicting figures from classical mythology:

The fresco of Cybele in particular seems a fairly unexpected one to see on a public building in Madrid, and not just because of her depiction here in a form similar to that of the Artemis of Ephesus: the bear and tree at her feet are the symbol of the city of Madrid, implying that she’s acting as a kind of patron goddess to the city. This must be a reference to the 18th-century Fuente de la Cibeles (Fountain of Cybele), just down the road from the art gallery district: here, Cybele (looking rather more respectable this time) sits in a chariot drawn by lions, holding a scepter and the key to the city, facing towards the city centre as though making a triumphal entry.

Cybele still seems an unlikely choice as a patron of the city, but I’m assuming this was influenced by her Romanised role as the protective Magna Mater (see, e.g., Aeneid 9.99ff., describing how Cybele’s sacred trees provided the escaping Trojans with ships), rather than as the Phrygian goddess of a cult whose priests ritually castrated themselves. Particularly since the fountain is now the unofficial symbol of the Real Madrid football team.

By the way, that tree being eaten by a bear, which acts as the symbol of Madrid, is described as a ‘strawberry tree‘. I assumed this had to be some kind of mythical tree, but apparently it actually exists, though the fruits just look a bit like strawberries. The Spanish word for it is madroño, hence its association with Madrid; Latinists may know it as arbutus (which turns up, for instance, in Ovid’s Metamorphoses 1.103-4, a description of foods eaten by the people of the Golden Age) but it’s also known as unedo, a name explained by Pliny the Elder as follows:

“[It is] a fruit held in no regard, as proved by its name, which comes from the fact that people only ever eat one” (Naturalis Historia 15.32).

Not exactly a ringing endorsement, but apparently bears like it?

Anyway, the tour continues with the Plaza de la Puerta del Sol, at one end of which stands another bear-and-strawberry-tree, in statue form this time; at the other is the Venus Mariblanca (Venus of the white marble), a replica of a statue which once stood on top of a fountain here. Madrid certainly seems to like its slightly inappropriate fertility goddesses.

As you walk down the Calle Mayor towards the Royal Palace, make sure to look up as you pass Calle de los Milaneses to spot this statue: 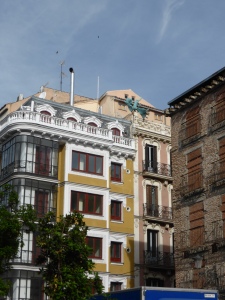 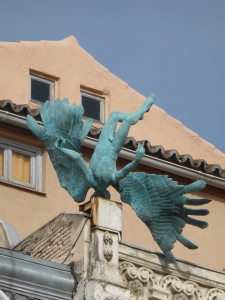 Like a good Classicist, when I saw this I assumed it had to be a depiction of Icarus falling out of the sky, though he’s generally described as falling into the sea rather than landing on his head on a building; but there’s nothing at the site to explain the sculpture or why it’s there. It turns out, however, that this isn’t actually meant to be Icarus; the sculptor, Miguel Ángel Ruiz, entitled it Accidente Aereo (Flying Accident), explaining it as follows:

“Ten thousand years ago a winged man went on a trip, and when he returned, flying calmly on his back sunbathing, he didn’t realise that in the meadow where he always landed a whole city had grown up. The result is this accident.” (translated from a quotation here)

Even so, the statue still clearly evokes Icarus (or Lucifer) to most viewers, and for me, its placement – high above the street, where most people probably don’t even notice it as they hurry past on the busy Calle Mayor – is actually quite reminiscent of the depiction of the fall of Icarus attributed to Bruegel the Elder, where all the focus of the painting is on the farmer in the foreground, going obviously on with his plowing while Icarus falls into the sea, barely visible. Mention of paintings brings me on to the main sights to see in Madrid, namely the art galleries (all of which are free for students under 25) – the Prado in particular has an amazing (and vast) collection of Spanish and European art, including (of course) plenty of classically-inspired works (it’s particuarly well-supplied with depictions of Saturn/Kronos eating his children, for some reason). Heretical as this may sound on a Classics blog, there is also of course a great deal of must-see non-Classics-related art (such as Picasso’s Guernica in the Reina Sofia gallery). But if you want to stick with the Classical theme, then the place to go is the National Archaeological Museum (also free for students) – recently renovated and consequently very shiny, new, and large. I managed to squeeze in about an hour and a quarter here on my way to the airport (yes, I know, far too keen) but could easily have spent three times as long. Spanish collections start with the Palaeolithic and go up to the 19th century by way of the Bronze and Iron Ages, the Roman, Late Antique, Medieval and Early Modern periods, and there are also Egyptian, Ancient Near Eastern, and Greek collections. I only made it as far as the beginning of the Roman section before I had to run off to catch my train, but I can attest that there are some very nice things up to that point: Palaeolithic carvings on antlers, gold-hilted bronze swords, Phoenician-influenced terracotta funerary statues, and plenty of inscriptions in obscure, largely undeciphered Iberian scripts to keep the linguists/epigraphers happy; the same goes for the Roman section, the small part of which I did see contained a lot of bronze law-code tablets and also this clay tile with the first line of the Aeneid written on it (fortunately, as it happens, the rest of the Roman section has already been recently reviewed by another Faculty member).

So, in conclusion: Madrid – highly recommended for art, archaeology, strange patron goddesses, sun (as I write this I am sitting looking out the window at the pouring rain. It got up to 35 degrees in Madrid last week) – oh, and did I mention the Spanish food already?

3 thoughts on “A Classicist in Madrid”

Teaching Classics and Ancient History in HE

Everyday Orientalism
Mixed up in Classics

The Inclusive Latin Classroom
All for National Archaeological Museum Athens

The Hunt for Looted Antiquities in the World's Museums

Exploring material texts from the ancient world to the digital age

Musings on Daily Life in the Ancient and Early Medieval Mediterranean By Sarah E. Bond