Just a quick reminder for any Cambridge-based readers that this week is the last chance to see the Fitzwilliam Museum’s Codebreakers and Groundbreakers exhibition about the decipherment of Linear B and WW2 codebreaking, which is finishing on Sunday Feb 4th! It’s been incredibly popular, and I’m told the catalogue has even completely sold out – for anyone who’s interested in reading more about the process by which Linear B was deciphered, and the people involved, I’ll be putting my catalogue chapter up here once the exhibition has finished, so check back for that next week! 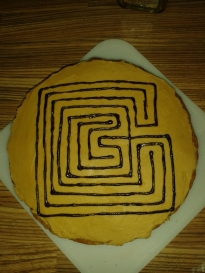 I’m very pleased to say that an article of mine has just appeared in the journal Studi Micenei ed Egeo-Anatolici (‘Mycenaean and Aegean-Anatolian Studies’). Although the article is called ‘The mystery of the Mycenaean “Labyrinth”‘, it’s not about the mythical Labyrinth in which the Athenian hero Theseus killed the Minotaur with the help of the Cretan princess Ariadne, or even the possible links this myth could have to the real Bronze Age Cretan palace of Knossos (which I’ve written a bit about before when I made a Labyrinth cake, pictured on the right). Rather, it’s about the Mycenaean Greek word for ‘labyrinth’ and what this can potentially tell us about the value of particular signs of the Linear B script (hence the subtitle: ‘the value of Linear B pu2 and related signs’). END_OF_DOCUMENT_TOKEN_TO_BE_REPLACED

Exciting results from excavations carried out on the Greek island of Keros by archaeologists from Cambridge, Greece, and Cyprus: in the Early Bronze Age (the 3rd millennium BCE) the promontory (now an island) of Dhaskalio was almost entirely covered in monumental buildings made of imported marble. Not only that, but this ritual centre was also home to two sophisticated metalworking workshops and a drainage system. You can read the full report from the British School at Athens here.

For anyone who enjoyed the Codebreakers and Groundbreakers exhibition – or who’s still planning to go see it – here’s another ancient writing display at the Fitzwilliam Museum!

We have been dying to tell you all about a new display at the Fitzwilliam Museum in Cambridge, focusing on some of the writing systems we are working on in the CREWS project. It started today (Tuesday 16th January) and will run until Sunday 10th June, which gives you plenty of time to come and see it! Here is the Fitzwilliam’s web page on the display: Writing in Cyprus and the Eastern Mediterranean.

The objects in the display are written in a number of different ancient writing systems, with Egyptian Hieroglyphic and Demotic, Babylonian and Ugaritic cuneiform, Cretan Hieroglyphic, Linear A, Cypro-Minoan, the Cypriot Syllabary, Phoenician and the Greek alphabet.