Just before Christmas a group of Classicists spent a week in Munich as the first part of the annual Faculty exchange with the Institute of Classical Archaeology in Munich’s Ludwig-Maximilians-Universität. As the exchange’s official Res Gerendae reporter, I’m writing a bit about what the week was like, in the hopes of convincing everyone who hasn’t yet been on one to sign up for next year’s. Which I reckon should be pretty easy to do when I say that most of the time that wasn’t spent in Christmas markets drinking Glühwein (or beer) was spent in beer halls drinking beer (or Glühwein). 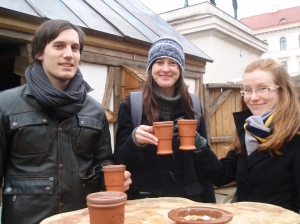